Billi Productions Ltd is an independent film company, based in Glasgow, Scotland that was set up by husband and wife producing team Sascha and Tessa Hartmann in 2006 to house Scotland’s first full length animated feature film entitled ‘Sir Billi’.

What started life as a short film concept in 2006 had progressed into a full length feature starring one of the most legendary voices in Hollywood, iconic Scot, Sir Sean Connery who joined this exciting project.

The Hartmann’s founded Glasgow Animation Ltd in 2000, the production hub that would produce Scotland’s first foray into the industry sector. This small privately owned animation studio were specialists in 3D character development and created the UK’s first virtual pop artist ‘T-Babe’ in the same year.

In 2004 Sascha co-created the ‘Sir Billi’ concept with his wife Tessa who penned the screenplay. Taking almost 12 months to illustrate the outline storyboards and draw all the characters by hand, Sascha is a perfectionist. Its the originality, depth of character and attention to detail that provides this concept its appealing and distinctive look. He spent months developing in-depth personalities for all the characters before production even began, recalling all those years of learning while studying neuro-psychology at Zurich University, Switzerland. Clearly one of the most important personalities was Sir Billi, voiced by Sir Sean.

This animated feature plays like none of the current fare on the market place. With it’s very distinctive look and warm textures it is rich with authentic and discreetly embedded humorous and artistic details within many of the interior scenes. Director and illustrator Sascha Hartmann paid homage to many of the world’s greatest painters including Jan Vermeer’s, Rembrandt to Caravaggio, with his clever twist on the Sir Billi’s art collection.

“Jan Vermeer’s ‘Geographer’ is a brilliant example of the masterful use of natural light. Vermeer has been a major influence on modern cinematographers and especially with our approach to lighting in Sir Billi,” stated Hartmann. Hartmann’s love of art, history and literature is splattered throughout the animated feature with clever references to Samuel Beckett and his very humorous iconography, with additional references to Michael Curtiz ‘Casablanca’ and Bob Fosse’s ‘Cabaret’, smoothly animated and played by Alan Cumming’s character, ‘Gordon the Goat’. We also see that Hartmann reinforces this trait of the reluctant hero, which can be depicted from other cinematic references in this iconography.

Hartmann also incorporated artwork of Connery’s wife, French artist Micheline Roquebrune, into the interior of Sir Billi’s cottage. He created a “Sir Billi” tartan for the film that was exclusively manufactured by Lochcarron of Scotland in 2006, based in Hawick. The ‘Sir Billi’ tartan fabric was woven over a period of ten weeks, then registered as a member of the Scottish Tartans Authority, proving its authenticity for the hero’s real-life and CGI wardrobes. Sir Sean Connery and producer John Fortune-Fraser were the first to receive Sir Billi kilts of course, closely followed by a full length tartan ball for Dame Shirley Bassey, another British legendary musical star, who joined the project to perform the title track ‘Guardian of the Highlands’.

The in-house graphic and technical teams developed customized software that was used to give “Sir Billi” a distinctive, warm look that allows the audience to see the world through the eyes of a highlander, Sir Billi, the last remaining ‘Guardian of the Highlands’. This combined with the strong cast, a sonic masterpiece from Scottish composer Patrick Doyle, a powerful and dramatic Bassey title track, and the inimitable voice of the legend that is Sir Sean Connery, provides for an independent animated adventure like no other.

Sir Sean said: “I’d been given an early drawing of what Billi would look like and it actually turned out to be spot on. In many ways that helped me to get into the character; but he’s a very straightforward, good guy! My wife who adores animation watched the scenes with me and she was laughing away. It really is very funny. One of the things that appealed to me about this project is that it is complete family entertainment.”

The project finance was supported by one of Scotland’s leading industrialists, John Fortune-Fraser, who founded one of the largest Steel Stockholders in Europe, based in Glasgow. Described as a serial entrepreneur, Fraser is producer on the project and is an active mentor to the Hartmann’s. “John’s entrepreneurial spirit is infectious and his encouragement and belief in this project since it’s inception has been rock solid,” said Sascha Hartmann.

This is a true ‘David and Goliath’ adventure from the Hartmann’s. As filmmakers their dream was to create an animated product that they could be proud of and indeed, in one of the mostly highly competitive industry sectors. It was a true labour of love as they fought to raise capital and overcome the hurdles through their 7 years of production, not to mention raising a family of 4 children at the same time. Fighting against the mighty budgets of the global animation studios, it was the hands on and ‘outside’ the box approach to the project that allowed them to tap into the high profile talent.

“We had no choice but to do everything ourselves,” said Tessa. “We never had a casting director or all the dozens of people that are normally associated with big studio productions, we literally managed everything in-house. We had a script, storyboards and gall and cold called all our cast and their agents. I guess you could say it’s ‘if you don’t ask, you don’t get Scottish mentality that allowed us to progress.”

Tessa’s background is in marketing and communications where she is also the founder of the Scottish Fashion Awards, whose principal aim is to provide a platform to shine a global spotlight on the nations top and emerging fashion, design and textile talent.

Sascha Hartmann, is an all round creative, whose additional impressive musical skills also enticed Dame Shirley Bassey to perform the title track on the film, marking the first time Connery and Bassey have been reunited since the Bond era – quite a coup for the rookies! Bassey needed no persuading after she heard Sascha’s demo and accepted the role immediately. “It was one of the best musical arrangements I’ve heard since Goldfinger, I just loved singing the song,” said Bassey who is now a close friend of the producers.

The Hartmann’s are major supporters of fresh talent and work with a small but key team of young creative’s within their business including Creative Technical Director Kevin McCormack who has been with the team since it’s inception. They remained true to their hearts by keeping production in Scotland.

“Sir Billi is quite simply the kind of grandfather we all wish we could have. My kids told me it was a kind of ‘James Bond meets Indiana Jones in the Highlands’ and I think they might be onto something!” said Sascha Hartmann. 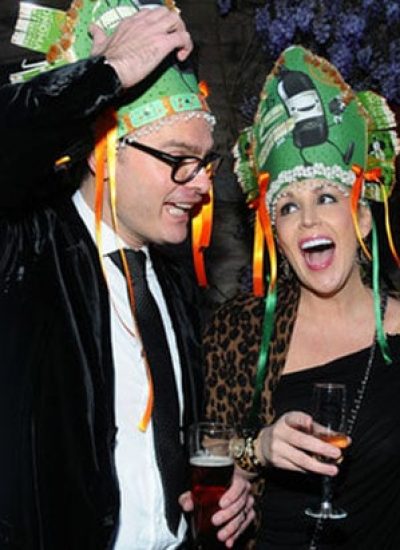